Spring is a wonderful time to visit Phoenix, Arizona. The weather is mild, and the area’s best whitewater raft trips are just a short drive away. No Phoenix vacation—especially during Spring Training—is complete without experiencing a whitewater rafting trip in the Salt River Canyon. And you won’t find a better whitewater rafting outfitter than Arizona Rafting!

There are so many things to do in the Phoenix area, whether it’s whitewater rafting, hiking amongst the Saguaro cactus in the Sonoran desert, golfing, or taking in a baseball game during Spring Training—you have so many options to make your Phoenix vacation perfect.

Phoenix, Arizona visitors are some of the best repeat customers we have, coming back year after year to Phoenix and the beautiful Salt River Canyon.

Join us on a Salt River Rafting adventure out of Phoenix beginning February 26, 2022!

Join us on our most popular Salt River rafting trip. Experience exciting class III-IV rapids at every turn, including Maytag, Grumman, and Overboard. Test your skills with the hot action waves of Exhibition and the infamous Mescal Falls. An optional hike and riverside lunch are included.
Trip Info 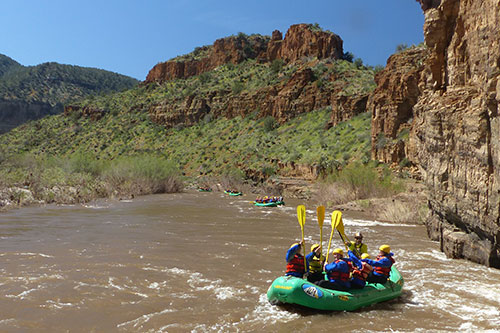 Raft with us in the morning on this fast-paced, short and sweet Salt River Half-Day section featuring exciting class III whitewater. Get soaked with our first exciting rapid, Kiss and Tell, and end the trip at our private beach for the shuttle back to the starting point.
Trip Info

Get all the thrilling rapids of the popular Full-Day trip with a later start time and on-boat snack. This raft trip offers the perfect mix of adventure, desert scenery, and exciting whitewater at an exhilarating pace. Enjoy 10 miles of exciting Class III and IV rapids of the Upper Salt River Canyon.
Trip Info Join us on our exhilarating full-day trip with rustic riverside camping and dinner the night before or after your trip. Secret bends and intricate boulder gardens mingle with exceptional class III and IV whitewater. This is the perfect trip for family, friends, and groups.
Trip Info

Raft 46 miles of challenging rapids and camp on remote riverside beaches on this 3-Day adventure in the Salt River Wilderness. With no shortage of exciting whitewater, raft through some of the oldest exposed rocks in the world and explore narrow side canyons leading to oasis-like habitats.
Trip Info

Get away in the remote and stunning Salt River Wilderness, tackle white knuckling whitewater, and enjoy the desert beauty on this 51 mile, 4-Day journey. Each day, explore new and challenging rapids and side hikes to remote Indian ruins or lush canyons. This is our most popular wilderness trip!
Trip Info

Treat yourself to a hidden gem by exploring every aspect of the Salt River Wilderness on this truly amazing 5-Day getaway. Float at a relaxed pace over 51 miles, while viewing scenic, ecological, and geological treasures on one of the premier whitewater wilderness trips in the West.
Trip Info
BOOK YOUR SALT RIVER TRIP NOW
TRAVELING TO COLORADO? CHECK OUT OUR COLORADO RAFTING TRIPS

Born From an Ancient Culture

For more than 1,000 years, the Hohokam people lived on the land that would become Phoenix. The Hohokam was an ancient culture that carried out extensive trade with nearby tribes, including the Anasazi and Mogollon. Their greatest contribution, however, was the establishment of over 135 miles of canals built in order to make the harsh desert land suitable for growing crops. The Hohokam eventually abandoned the area around 1300-1450 because of long periods of drought.

The year 1866 saw a small camp form on the south side of the Salt River (now Tempe). This was the first permanent settlement in the valley since the decline of the Hohokam. This settlement was formed by Hispanic workers from Fort McDowell—the US Army’s camp located along the Verde River. The camp was formed in 1865 to quell Native American uprisings.

In 1867, a man named Jack Swilling observed the abandoned river valley and its potential for farming. The terrain and climate were ideal—the only problem was a regular source of water. It was the existence of the long-gone Hohokam cultures canals that made Swilling’s dream of farming become a reality. He had a series of canals built that followed the ancient tribe’s existing system. The area flourished. Many names for the new community formed, but it was Lord Darrell Duppa that suggested it be named “Phoenix,” as it described a city born from the ruins of a former civilization.

The city of Phoenix was later incorporated in 1881 with an estimated population of 2,500. In 1912, Phoenix became the capital of the newly formed state of Arizona. By 1950, the population had grown to an estimated 100,000 people. Like many cities in the American west, it has endured its share of fires, floods, and crime sprees. It is now a thriving metropolitan city with many things to offer both residents and visitors.

For help planning your vacation, check out the following informative links:

Lodging
The choices in the area are endless. You’re guaranteed to find the perfect accommodations for your Phoenix vacation.

Restaurants
Phoenix has a great selection of dining choices offering up a variety of cuisine from around the world.

Activities
Make your Phoenix vacation one you’ll remember forever. Rafting is just one of many fun and exciting activities to try. Spend some relaxing time at a spa or get out and enjoy the scenery on a hike or horseback ride.

There is no end to the list of activities and attractions near Phoenix, AZ. For excursions outside the city, you can hike or take a whitewater rafting trip through the Salt River Canyon, visit Saguaro National Park, or walk through history at the Casa Grande Ruins National Monument.

If staying close to the city is more to your liking, take some time to shop in Scottsdale, walk amongst the natural rock formations in Papago Park, visit history itself at Tovrea Castle, catch an exciting baseball game during Spring Training, or take in NASCAR race at Phoenix International Raceway.

Don’t forget to visit many other vacation towns and destinations on your Phoenix, AZ vacation, including Tucson, Globe, Sedona, and Flagstaff.